你好 and Salaam everybody!

So first thanks for all the feedback and support for the blog! Please let it keep coming!

I’m going to focus this post primarily on some of the adventures I’ve taken solo. It’s always nice to travel in groups, have a native speaker with you but sometimes you can travel much quicker/ learn a lot more by yourself. (IPD folk prob don’t endorse this behavior- don’t worry I didn’t go anywhere too far/ foreign)

As a Muslim I follow a dietary standard called halal, its similar to how Jewish people observe Kosher. I basically cannot eat meat unless the slaughter is made in an appropriate manner for those of you who don’t know. One of the biggest questions I got from family and friends before traveling to China was “What are you going to eat?”  I would follow it up with a response with “You don’t think I’d be able to find anything to eat in all of China?”

Guess what I was right (as I usually am, jk- no but really in this case I was). Well to be fair China is not very vegetarian friendly. Most vegetarian dishes even have meat flavoring. Lunch during the week which is provided through the program- Gu Laoshi (Professor Gu- sort of our main adviser program) makes sure that we always have a vegetarian option. So for lunches its been easy- usually we get some chinese food, but we occasionally switch it up and have pizza/ subway.

The first couple of days I was at Beida I was determined to find my “go-to.” I looked around on google maps and found a halal place pretty close by. It was actually around the block (but that could be up to 20 minutes walking). I eventually found the restaurant- a very simple place, seemed like it was family owned and run. The lady at the counter was wearing a headscarf, and there was Arabic scripture hung around the restaurant- so I knew I was at the right place.

I ordered some chicken dish (yes finally some real PROTEEEINNNN!), with rice, peppers, onions,  with a surprising amount of ginger,  and this really interesting looking Naan (bread). Overall I was really pleased with the meal- everything was delicious and the best part was it was only 15 yuan (1 dollar is ~6.3 yuan- you can do the math). I thought to myself it’d be really nice to come to this place often but a 20 min walk might be tough- I could buy a bike? Maybe ride the scooter that is prob my roommates (but that would be wrong). Eh I decided to look for a  shortcut on my way back.

I knew I looped around the block and that the restaurant was not too far away from the building complex I was staying in (I could see the buildings). I came across a security guard and asked him how to get to the building by pointing at it, and showing him my ID card. He signaled that I had to loop around, but I insisted that go around was too far ( this was all done by facial expressions and hand gestures btw) He reluctantly pointed me to a fence- which had an opening! It was a way back to the back of the the complex:

SUCCESS! I know what you’re thinking- that’s a grimy shortcut. When I walked over and saw the whole in the fence (you can’t quite see it in the picture) I thought to myself should I??

Well… CHOLO! (China only once- yea it doesn’t really work, we still have adopted it as a catchphrase for our trip)- I went for it. Very simple actually- just leaned against the ledge and held on to the fence. Once I came to the other side- I took the 2 pictures and right after I saw a couple of natives using the shortcut- so it wasn’t just me.

I’ve gone back quite a bit to the restaurant. I’m actually unsure of what it’s called- I think it may be Ke Yuan Muslim Restaurant (according to Google).  The other rice dishes have been pretty awesome- especially the spicy chicken one with a bunch of peppers:

I’ve had noodles from there too, but I prefer the rice. There’s another place actually on the Beida campus that serves food to Muslims. I’ve gone there a few times- you can get a meal under 6 yuans, but the quality is not as great as the restaurant.

I’ve been fortunate not to have Public Health class on Friday afternoons, and have been able to attend Friday Prayers or Jummah every week thus far. The first week I went to the gorgeous Madian Mosque about 30 mins total by subway/walking. The subway is awesome btw, so easy to use and it only costs 2 yuan per ride. I’m pretty sure they were renovated for the Olympics:

Madian Mosque was beautiful. I had never seen a Mosque like it- It had an open courtyard with different really old buildings. One building was just for wudu (ablutions), another was a gift shop, another was an administrative building. I made a comprehensive video. I apologize for it being kinda shaky- but here it is:

After prayer I met a brother from Pakistan who guided me to a restaurant where I had some beef noodles and met another Pakistani man. Pretty awesome:

They both knew Urdu and English and we struck up a conversation over lunch about China and how far the nation has come in the past couple of decades. Both of the men were graduate students at universities in the Beijing area, and they told me over and over again how awesome of a place China is. Despite them having been here for a few years, they said the language is very tough to pick up. We continued to talk about politics, and the state of Pakistan, India and China. After a bit, he said he had to get going and told me that the food had already been paid for. I insisted to pay for the meal, but on his way out he replied “Welcome, this is China.”

Overall I’ve been impressed with the kindness of the Chinese people. Numerous people have stopped and try to help me when looking at a map, and people have always been patient with my inability to speak the language. It kinda makes me think- would I do the same to Chinese foreigner visiting New York? I really don’t know- Is it because I’m biased/ expect foreigners to know English? The Pakistani man truly gave me some food for thought (pun intended).

The week after, based of a recommendation from the Pakistani brothers- I visited Niuje Mosque. I thought Madian was awesome but to be honest, Niuje makes Madian look like nothing. The shear size of Niuje along with its age and location (more central in Beijing) made me understand why it was worth visiting. It was similar stylistically to Madian but just so much bigger. I’ve got a bunch of pictures that I’ll prob upload to fbook soon. But here are a couple:

Really remarkable stuff. Niuje had a bunch of tourists as well, a bunch of people stuck around to take pictures.

On the way back – I can’t remember exactly which trip (Madian or Niuje) I attempted at buying a subway ticket. I gave what looked like 5 yuan bill to the cashier. He looked confused- Apparently it was a 5 Wu Jiao bill which is equivalent to half a yuan- hence a 50 cent bill: 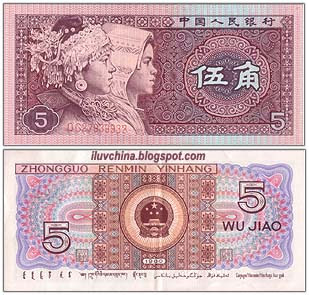 Just one of the many embarrassing moments about not knowing how China works. Well you learn something new everyday!

Alrighty that seems like a good deal for this post. I’ll be sure to talk about the group excursions in the upcoming posts.

Those masajid are beautiful subhanallah! It must’ve felt amazing to be able to pray there. And the food looks amazing! Looks like you’re enjoying yourself 🙂 Keep us updated!

THIS IS AWESOME! i didn’t even know you had a blog…