One of the advantages of being an Arryman Fellow is joining a three-week English as a Second Language (ESL) short course, which is specially designed for the newly arrived fellows. The tutor for this year is Kathleen Geraghty, a Northwestern graduate from the Communication Sciences and Disorders Department. The intensive course lasted for three weeks for about three hours per day. The course was mainly conducted at the Roberta Buffett Center for International and Comparative Studies at Northwestern University, with several occasional field trips to downtown Evanston.

During the course, the Arryman Fellows received not only English language tutorials, but also how to adapt to American culture, both in academic and casual settings. For instance, Ms. Geraghty taught the Arryman Fellows how to lead a fruitful discussion as a student or as a teaching assistant (TA). She also taught the fellows how to create an impressive elevator pitch – a very brief introduction – which will be very useful when they meet their future colleagues or professors in various occasions such as seminars, conferences or casual meetings in their respective department hallway. One of the most important lessons that the fellows received from their tutor was how to pronounce words in an American English accent, which is very different compared to other English accents, such as Singlish, Taglish or even British English. 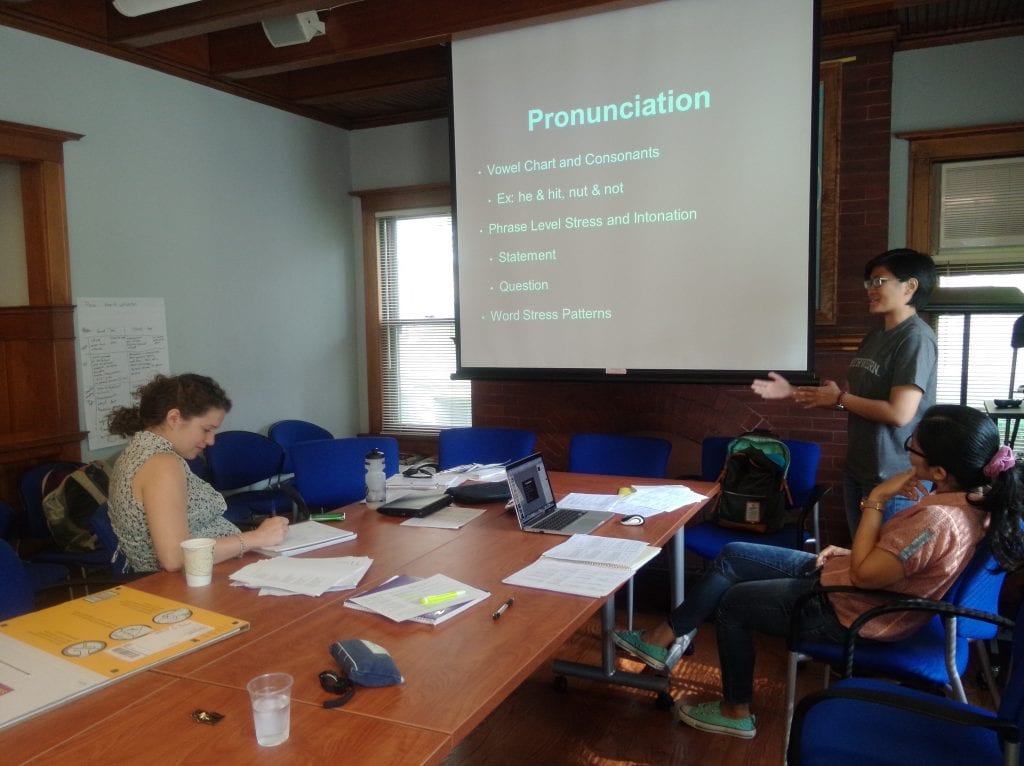 Ms. Geraghty employed various teaching methods that not only made the tutorials seemed less serious, but also significantly improved the fellows’ understanding about ESL and American culture. For instance, in one of the tutorial sessions, Ms. Geraghty took the Arryman Fellows to a local coffee shop in downtown Evanston. She wanted to introduce the fellows to service culture in the US. The fellows learned that tipping is a very important custom in American service culture because it shows our appreciation to the good service of the server. On a different note, the fellows also learned that pronouncing “café latte” in an American English accent is slightly different compared to an Indonesian one. It may seem unimportant, but one of the fellows almost ended up with a cup of tea instead of a latte because the way Indonesians pronounce latte sounds similar to the word “tea” for a native speaker of American English.

The short course also helped the fellows prepare for the SPEAK and VERSANT tests, which are required by the International Summer Institute (ISI) to measure English proficiency of the incoming international students. ISI requires the new international students to pass the tests.  Otherwise, those who failed the tests will need to attend additional classes in order to improve their English skills.

* The Arryman Fellows would like to deliver their highest gratitude to Kathleen Geraghty for her guidance, passion and determination in helping the fellows to adjust to their new life in the US.