In December 2016, current Chelsea manager Antonio Conte said it would be “impossible” for any Premier League team to hit or break the 100-point barrier because of the league’s competitiveness and demanding schedule. Conte spoke with the authority of someone who had been crowned a centurion before: He was the manager at Juventus when the club set a Serie A record for its 102-point finish during the 2013/14 season.

When Manchester City finished their season with a 1-0 win over Southampton on May 13, they made history in more ways than one: not just setting the Premier League records for most points, wins, goals, goal differential and winning margin, but also becoming the first team to ever reach the centurion mark in the top division of English football.

Other clubs in the second and third tiers of leagues have hit the 100-point mark; in a relatively recent example, Leicester City collected 102 points in the Championship (the second tier of English football) in the 2013/14 season to earn promotion to the Premier League, which they’d win just two seasons later, and current champion Wolverhampton finished with 99 points this season. Only three other clubs in Europe’s top five leagues – the Premier League (England), Ligue 1 (France), La Liga (Spain), Serie A (Italy) and the Bundesliga (Germany) – have hit the centurion mark:

I decided to look at the numbers that make a centurion. Specifically, I analyzed:

I used these questions to consider what it was about Manchester City’s 2017/18 performance that allowed them to do something that a person like Conte said could never be done.

How Much Each Centurion Spent Per Point, and What That Looks Like in 2018 U.S. Dollars

This data uses the money spent on transfer fees to assemble a squad and does not include the club wages that can also factor into the total money the club has spent. These calculations, initially counted in pounds or euros, were converted into U.S. dollars and then from there into U.S. dollars in 2018, as inflation rates have changed since the initial fees were calculated, to make the data easier to compare. This data came from each club’s website and from transfermarkt.com.

Manchester City spent a whopping £699.7 million on transfer fees to assemble the squad that won the title and reached 100 points this season. When converted to U.S. dollars, that’s a total of $940,213,438.88, or $9,402,134.38 per point. That total spent on transfer fees includes the club’s record signing of French center back Aymeric Laporte for £57 million and the signings of 18 different players for £20 million or more. 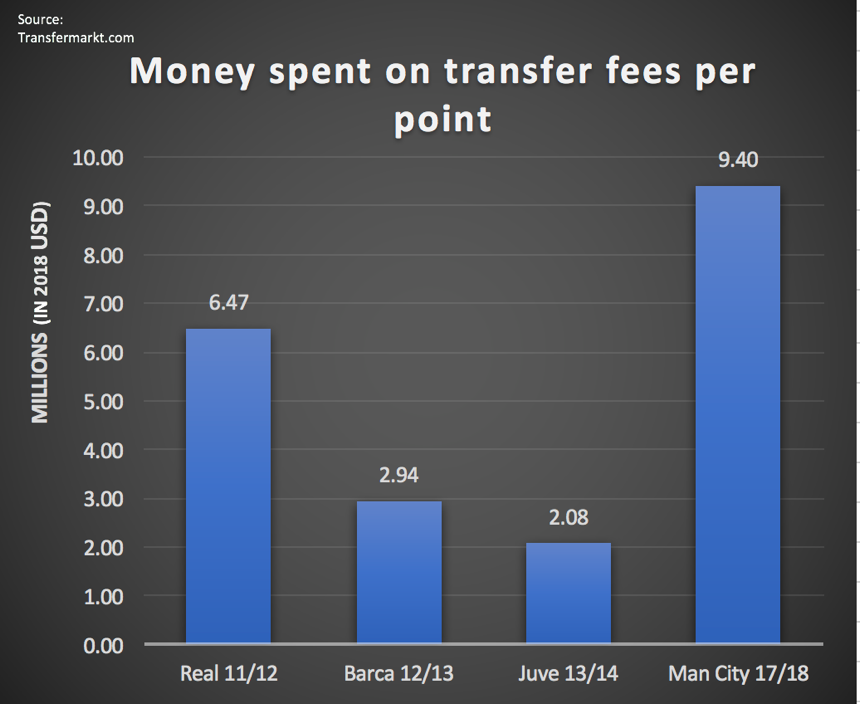 Out of the three other centurion teams, Juventus spent the least amount of money per point to assemble their title-winning squad, at only $2,076,086.73 per point in 2018 U.S. dollars. Only one player on that team – goalkeeper Gianluigi Buffon at €45 million – was signed for a transfer fee of more than €18 million.

Barcelona’s 2012/13 squad is an interesting one compared to the others. Twelve of the 23 players on the squad, including that team’s captain and vice-captains in Carlos Puyol, Xavi, Andres Iniesta and Lionel Messi, were all brought up through Barcelona’s youth academy system, and therefore did not require transfer fees to be added. The money the club spent on transfer fees per point – $2,940,934 – is significantly lower than that of rival Real Madrid in 2011/12 or Manchester City in 2017/18. This season’s Manchester City squad had only three players who were brought up to the first team through the academy system, and those three made a combined six appearances in league play.

The Statistics Behind Each Centurion 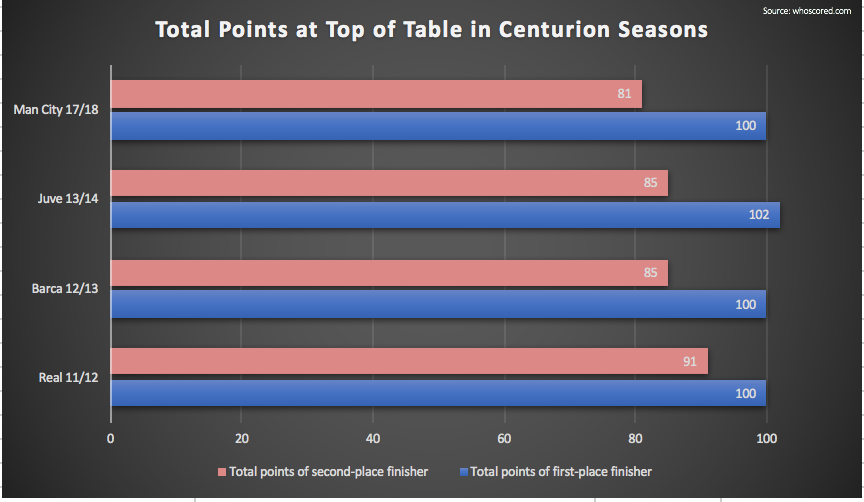 I next compared two key pieces of statistical information of these centurion teams to the other top-four finishers in their leagues in the respective seasons: 1) The average number of chances created per game and 2) the overall rating given by whoscored.com. The whoscored.com rating takes into account these factors:

Manchester City led the Premier League in both chances created (15.4) and overall rating (7.15) in 2017/18. Interestingly, there isn’t a correlation between the order of finish for the top four teams in the table and the order of finish in terms of most chances created or overall rating. While Manchester United finished with 81 points in second place, the team that finished in second place statistically (among chances created and cumulative rating) was Liverpool, which finished fourth in the table. Liverpool was the only team to beat City more than once (across all competitions, not just in Premier League play) this season: 4-3 in January at Anfield, 3-0 in April again at Anfield in the Champions League and 2-1 again in April at the Etihad to knock City out of the Champions League.

Juventus also led Serie A in chances created (13.8) and tied for the highest overall rating (7.09) in 2013/14. This squad led by close margins in chances created, total goals and shots per game, but wasn’t even the top team in the league in terms of possession percentage (Roma), pass completion percentage (Roma) and aerials won (Fiorentina). Juventus never lost at home that season, but they did lose once to Fiorentina in league play and once to Roma in the Coppa Italia quarterfinals.

Barcelona’s 2012/13 season is an interesting case. They didn’t lead the league in chances created per game (12.9), but did have the highest total rating both in La Liga and historically among the four centurion teams at 7.20. Barcelona scored the most goals of the four teams, despite not having the most shots per games, but their strong possession percentage and stellar pass completion percentage gave them the edge in the rating. Barcelona led the league overall in possession percentage by 9 percent (Rayo Vallecano, who finished eighth, had a 55.9 percentage) and in pass accuracy by 8 percent, while forward Lionel Messi scored more than 40 percent of the team’s total goals.

Real Madrid led La Liga in chances created (16.4) in 2011/12, but didn’t have the highest rating. As in the 2012/13 season, Barcelona topped Real Madrid in possession percentage by more than 9 percent and in pass completion percentage by almost 10 percent. What they lacked in possession percentage and pass completion percentage, Real Madrid made up for in scoring: The total of 121 goals remains a La Liga single-season record, and the team was held scoreless in only three of the total 58 games across all three competitions (La Liga, Copa del Rey and the Champions League) in which they played that season.

How the Centurions Compare to Each Other 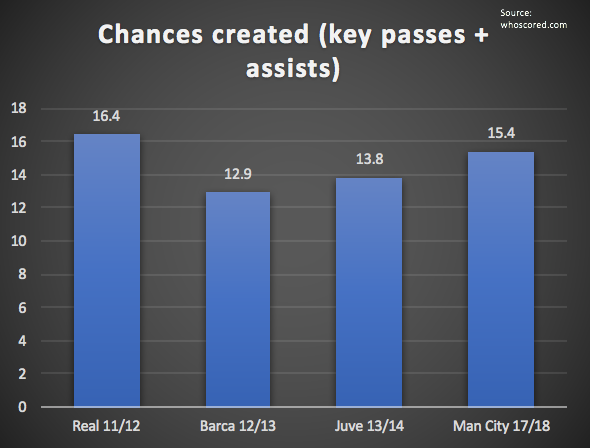 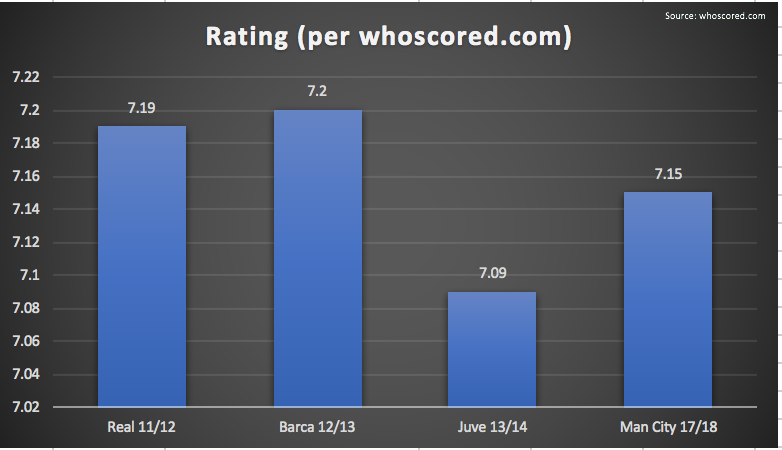 Out of the four centurions, the 2011/12 Real Madrid team finished with the most chances created per game (16.4). Cristiano Ronaldo averaged 1.9 created chances per game during that season, and he was given an overall rating of 8.28 for La Liga play.

The 2012/13 Barcelona squad finished with the highest overall rating (7.2). This rating was interestingly the second-highest rating given to a team that won its league among the top five European leagues during the 2012/13 season:

The Bayern Munich team that finished with a 7.31 rating won the Champions League for the 2012/13 season, defeating Barcelona on a 7-0 aggregate in the semifinals. A team from the Bundesliga has never reached the centurion mark – the record for most points won in a season was set by that 2012/13 Bayern Munich team – but the league’s 34-game season is shorter than those of La Liga and the Premier League and allows for a maximum of 102 points to be won rather than 114.

How was Manchester City able to become the first ever English team to reach the 100-point mark? By looking at this data, some conclusions can be drawn that help to answer this question:

The similarities between the attacking styles and therefore the numbers behind 2012/13 Barcelona and 2017/18 Manchester City should come as no surprise: Both teams played Pep Guardiola-style football. While Guardiola left the Spanish club after the 2011/12 season, Barcelona’s manager during the 2012/13 season was longtime Guardiola assistant Tito Vilanova in his lone season at the helm.

As Barcelona’s season was getting underway in 2012, football journalist Sid Lowe wrote in the Guardian that Barcelona’s “4-3-3 based on possession and swift circulation of the ball” hadn’t changed despite the managerial shift, and that the statistics from the 2011/12 season to the 2012/13 one reflected Vilanova’s desire to stick to the system Guardiola instituted at Camp Nou. Guardiola has maintained his commitment to playing passing, attacking football in his two seasons at City.

It took Guardiola nine seasons of coaching in three of Europe’s top leagues to finally become a centurion. After City’s win over Southampton that officially gave them the record, he even acknowledged that the world will not likely see another 100-point squad in the Premier League – perhaps in any league – for quite some time.

“We are going to lose next season,” he told Sky Sports. “To compare with what we have done, we are going to lose. We cannot do better than this season … When you get to 100 points, it’s something special for all the club. It’s a record which will stay for long.”