Sistema Sac Actun (white cave) is one of the cave systems that discharge fresh water into the Caribbean Sea. Different roof collapses have formed more than 220 cenotes in the area.

The longest underwater cave on planet Earth is under the municipality of Tulum in Quintana Roo at the eastern coast of the Yucatán Peninsula (Mexico). It extends for more than 350 km at an average depth of 21 meters and a maximum depth of 120 m. Sistema Sac Actun (white cave) discharges fresh water into the Caribbean Sea. Different roof collapses have formed more than 220 cenotes in the area.

The systematic exploration of the underwater caves of Quintana Roo began in Tulum in the mid-1980s. Different teams of divers began to explore, survey and map the numerous cenotes of the region and found extensive associated passages between them. The length of each cave system grew as independent teams linked their records. The exploration of the long cave system of Sac Actun began in 1987 from Gran Cenote, located ~ 5 km north of Tulum. In early 2007, it was connected to the Sistema Nohoch Nah Chich, becoming the longest underwater cave system in the world. By January 2011, thanks to the connection with Sistema Actun Hu (+34 km), Sac Actun accumulated 230.8 kilometers explored and registered on maps. However, by May 2017, with a recorded length of 259.5 km, it was surpassed by the Sistema Ox Bel Ha  that had 270.2 km (QRSS, 2018).

Since the beginning of 2007, these two underwater caves frequently exchanged the title of the longest system in the world. In 2018, the discovery of a connection between Sac Actun (at that time 263 km long) and Dos Ojos, 84 km long, was reported. As usual, the larger system “absorbs” the second, retaining the name of the first. The addition of connected dry caves makes Sistema Sac Actun, with a total of 353.01 km, the longest cave in Mexico and the second longest in the world (behind Mammoth Cave in Kentucky, USA). Either way, it is the largest underwater cave system on planet Earth. 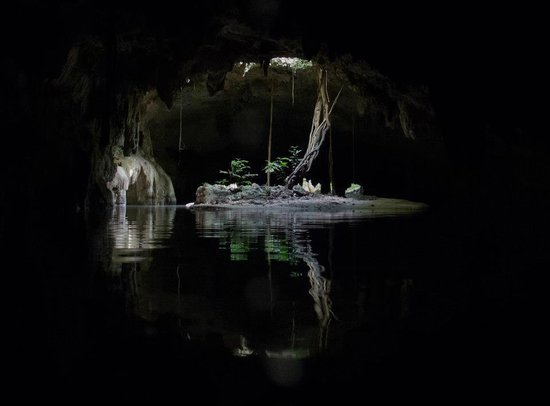 A detailed study of Sistema Sac Actun  was published in 2016 by Pat Kambesis and Jim Coke. Here I reproduce the summary of the article entirely, as considering it highly relevant and accurately descriptive (Kambesis & Coke, 2016):

The Sac Actun system, located in northeast Quintana Roo, Mexico, is among the most extensive underwater cave systems located along the Caribbean coast of the Yucatan Peninsula. The cave is composed of linear phreatic conduits that have two forms. The coastal sections of the Sac Actun system are characterized by low horizontal tunnels that form mazes paralleling the coast and rudimentary conduits broken by fracture-controlled rooms. Inland passages are fault/fracture controlled, have a linear, anastomotic 1 configuration, and align perpendicular to the coast. Access to the cave system is gained through cenotes which are the portals into the Yucatan underwater cave systems. The occurrence of drowned speleothems in many parts of the cave system, and sections of air-filled upper level passages are indicative of major fluctuations in sea level. The Sac Actun system is part of one of the most extensive and significant eogenetic karst aquifers in the world. The development of the Sac Actun system, as well as the many other caves systems along the Yucatan Caribbean Coast is controlled by the coastal hydrologic regime, driven by glacio-eustatics, and influenced by stratigraphic and structural controls. The karstic permeability of the aquifer makes it and the Sac Actun system vulnerable to the anthropogenic impacts of increased population growth, quarries, and infrastructure development associated with the burgeoning tourist industry that dominates land use in the region. Figura 3. The general morphology of the Sac Actun System presents two different configurations: i) the sections closest to the coast show a high density of rectilinear labyrinths parallel to the coast, with a northeast-southwest trend, which discharge fresh water to the coast ; ii) the sections of the cave located more than 1 km from the coast have a shape controlled by faults, they are anastomosed and perpendicular to the coast in a northwest-southeast direction. The cave passages are elliptical and the speleothems are common  (Kambesis & Coke, 2016).

The extensive cave systems under the Yucatan Peninsula have also been a guardian of hidden and invaluable treasures to learn from our history. Remains of Pleistocene animals and humans that date from a time long before the occupation by the Mayan civilization have been found within submerged passages and galleries. Beeing underwater, these caves provide a unique environment for the preservation of human and animal remains. The Woman of Las Palmas creates new questions about how and when our ancestors arrived in this continent.

In 2006 the almost complete skeleton (90%) of the “Mujer de Las Palmas” was found in another underwater cave 4.5 km off Tulum, which corresponds to a woman between 45-50 years of age and 1.52 m tall. The findings are key pieces to understand the settlement of the Americas.

A few years before, in 2004 were found the remains of the “Mujer de Naharon” (Eve of Naharon) between 20-25 years of age, at 23 meters depth and at 370 meters from the nearest entrance, in the Sistema Naranjal. Their bones were dated in 13,600 years of antiquity, although it is on dispute and new datings are currently being made. The archaeological site of Chan Hol II before being vandalized. The skeleton was originally complete and almost articulated. Photograph by Nick Poole and Thomas Spamberg (Stinnesbeck et al., 2017).

The “Joven de Chan Hol” (Young Man of Chan Hol) was found in the Chan Hol cenote of Sistema Toh Ha, 32 km long. The body was placed (possibly) in a funeral ceremony made at the end of the Pleistocene, when the sea level was ~120 m below and before the caverns that the young man met and visited were flooded. Isotope analysis in a speleothem associated with bone suggests ~13,000 years old. In February 2012 various media reported the findings and a few days later, the cave was vandalized and many bones were stolen between March 16-23 by people not yet identified. For this reason, many locations are kept in secret.

The story of Naia

In 2007, in the section of the Actun Hu cave, in a place called Hoyo Negro (Black Hole)  were found at a depth of 42 m the remains of an adolescent woman between 15 and 17 years old -named Naia– with a estimated age between 12,000 and 13,000 years. The skeleton is complete and genetically intact. Divers Alberto Nava and Alejandro Alvarez search the walls of Hoyo Negro, an underwater cave on Mexico’s Yucatán Peninsula where the remains of “Naia,” a 12,000- to 13,000-year-old teenage girl, were found. Paul Nicklen/NATIONAL GEOGRAPHIC.

In years after the discovery, careless divers manipulated the remains and to avoid further interference, the bones were removed from the cave between 2014 and 2016, which allowed more scientific studies. Analysis of Naia’s mitochondrial DNA has indicated a genetic link between Paleoamerican and modern Native Americans. Alvarez is one of the original divers who discovered Hoyo Negro, an underwater site in the Yucatan Peninsula filled with ancient human and animal bones. Years later, he returned to Hoyo Negro as part of the expedition to retrieve  and research Naia, one of the oldest and best preserved skeletons ever discovered in the Americas.

Exploring divers found her in her wet tomb, beside her laid other animals which were identified as sabretooth, gomphothere (relative to the modern elephant), giant tapir, boar, bear, puma, bobcat, coyote, coati and bat. A couple of divers transports Naia’s skull to an underwater plate to photograph it and create a 3D model at the bottom of the underwater cave on June 15, 2013. Genetic tests on its magnificently preserved skeleton have helped to rethink questions about the origins of the first people to enter the continent and their relationship with today’s native populations. REUTERS / Paul Nicklen / National Geographic.

The carbon-14 dating of the enamel of her teeth yielded a maximum age for Naia of about 12,900 years. Calcium carbonate accumulations that grew on the bones of Naia have been dated in 12,000 years by the uranium-thorium (U/Th) method . The high density of caves and cenotes within the urban area of ​​Tulum is a direct threat to the construction of massive tourist and housing developments because in many sections the roof of the cave is very thin. The protection of Sistema Sac Actun – and of other equally important ones in the region – from climate and human impact involves and requires serious regulations in wastewater treatment in the Riviera Maya, upgrading building codes, and continuous hydrological research and  monitoring programs of the karstic aquifer. It must, undoubtedly, be included in present and future regional development policies. List of underwater caves of Quintana Roo Mexico, by length: