Earlier this month, the US EPA hosted Prof. Erica Hartmann to give a seminar on antimicrobials and microbes indoors. Her presentation focused on how the combined exposures to microbes and chemicals can affect indoor environmental quality and human health. This info is particularly important in the context of COVID-19 and our massive increased use of disinfectants. If you missed the webinar, you can check out the recording on YouTube.

The Hartmann lab is out in force at ASM’s Summer of Science! Check out our posters, linked below:

Improving Methods for Understanding Surface Microbiomes in the Medical Intensive Care Unit: A Focus on Sample Treatments Prior to DNA Sequencing

Chlorhexidine on Hospital Surfaces: a Focus on Interactions with Disinfectants and Microbes

Also, check out our collaboration with the Huttenhower lab at the Harvard School of Public Health on Characterizing microbial community viability using propidium monoazide!

Hanna Bertucci, a junior in the Hartmann lab, was awarded first place in the Natural Sciences and Engineering category of the poster presentation session at the 2020 Undergraduate Research and Arts Exposition, hosted by the Office of Undergraduate Research. Her poster described the work she has been doing with graduate student Alex McFarland and fellow undergrad Erica Littman to characterize triclosan tolerance mechanisms in a variety of species within the genus Pseudomonas. Due to COVID-19, the Expo was held virtually this year, with students recording their presentations and sharing their posters online. A screenshot of Hanna presenting her poster during the virtual expo.

Poster presentations were judged by faculty from throughout the university. Judges left Hanna glowing comments:

“Very easy to follow – I loved the arrow that moved as you talked. The color coding helped too.”

“You made this comprehensible to me! Thank you.”

“This project was admirably clearly presented and I felt that as a professor in the humanities I could follow it entirely. Neither the subject matter nor poster sessions themselves exist in my field.”

“The problem was introduced quite skillfully, and both the context and broader implications were well explained. I thought that the use of the pointer during the presentation was well-done, as it allowed the distant viewer to follow the logic of the presenter.”

In the wake of the COVID-19 pandemic, people are thinking a lot more about cleaning. Prof. Erica M. Hartmann weighed in on how to get rid of viruses while minimizing the risk of antibiotic resistance. Check out some of the media coverage (updated 4/15/2020 4:50 pm):

Check out our research on how cleaning products and antimicrobials affect antibiotic resistance. And for a bonus, here’s a blog post on how cleaning with bleach impacts indoor air quality.

Some folks from BTN recently came out to do a shoot for a LiveB1G video, which is now up!

You can also see some behind the scenes shots on Instagram. Thanks to all the folks in the lab who made way for the film crew and took time to meticulously demonstrate some of the work we do.

Learn about how manmade chemicals are altering our microbial world with Prof. Erica Hartmann at the Firehouse Grill. This event is part of the Northwestern Science Cafe. All are welcome! Mia Tran, a sophomore in the Hartmann lab, was recently granted admission to the Science Undergraduate Laboratory Internship (SULI) program. Congrats, Mia! Here’s what she has to say about it: I’ve been offered the opportunity to intern at Argonne National Laboratory this summer, under the SULI program supported by the Department of Energy, which I’m very very excited about. I will be doing research on contaminant cycling and transformations in wetland environments, which aligns well with my current interest in water, chemistry, and ecosystems. It feels surreal to me still, and I could not have gained the experience and connections that were important in my application process without the time I’ve spent with this lab! 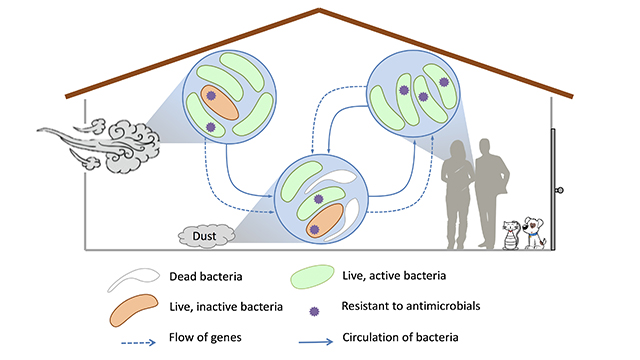 EVANSTON, Ill. — Indoor dust is evolving — and not in a good way.

A new Northwestern University study is the first to find that bacteria living in household dust can spread antibiotic resistance genes. Although most bacteria are harmless, the researchers believe these genes could potentially spread to pathogens, making infections more difficult to treat.

“This evidence, in and of itself, doesn’t mean that antibiotic resistance is getting worse,” said Northwestern’s Erica Hartmann, who led the study. “It’s just one more risk factor. It’s one more thing that we need to be careful about.”

The study will be published on Jan. 23 in the journal PLOS Pathogens. Hartmann is an assistant professor of environmental engineering in Northwestern’s McCormick School of Engineering.

Bacteria can share many different types of genes — as long as the genes have mobile segments of DNA. Hartmann and her team were the first to find that antibiotic resistance genes in dust microbes have mobile capabilities.

“We observed living bacteria have transferrable antibiotic resistance genes,” Hartmann said. “People thought this might be the case, but no one had actually shown that microbes in dust contain these transferrable genes.”

Although it is rare for pathogens to live in indoor dust, they can hitchhike into homes and mingle with existing bacteria.

Why do bacteria share genes? Hartmann says they can’t handle the stress of being indoors. The indoor environment might be too dry and cold without enough food, for example, or it might be occasionally spritzed with antimicrobial solutions. (Hartmann, by the way, recommends dusting with a damp cloth instead of using antimicrobial solutions, which can make bacteria more resistant to antibiotics.)

“Microbes share genes when they get stressed out,” Hartmann said. “They aren’t equipped to handle the stress, so they share genetic elements with a microbe that might be better equipped.”

The study, “Mobilization antibiotic resistance genes are present in dust microbial communities,” was supported by the Alfred P. Sloan Foundation and the Biology & the Built Environment Center at the University of Oregon.

This story was originally published by Northwestern University.

PhD student Alexander McFarland recently did some outreach with senior citizens. He talks about the experience here.

I recently had the opportunity to go to the Levy Center with the Science Policy Outreach Task Force (SPOT), a Northwestern University science advocacy group, to speak with senior citizens about bacterial antibiotic resistance. When I first signed up for this event, I was told to give a presentation about any important scientific problem that voting-aged citizens should be aware of. Naturally, I picked antibiotic resistance due to its increasing clinical prevalence and the need for policy-level actions to reverse the trend.

In my mind, the battle between scientists developing antibiotics and bacteria evolving resistances to them is similar to arms races in human history. Using this metaphor, I hoped to communicate that you can help stop the arms race by:

At the conclusion of my talk the audience had many more specific and detailed questions and comments that went beyond my simple presentation on the antibiotic arms race. We ended up having an informative discussion on topics such as antibiotic use in farm animals and the pros and cons of antibacterial vaccines. Overall, I had a great time and look forward to future outreach events with SPOT.

Alex from the @ericamhartmann lab and I chatted with some curious and engaged seniors this morning about GMOs/food labels and antibiotics. We had some great questions! Check out @SPOTforceNU to learn more about their really amazing Science with Seniors program! 🌽🦠💊 – LC pic.twitter.com/3P7zhSYPwK

During ASM Microbe 2019 in San Francisco (the Amer. Soc. For Microbiology Annual Conference), postdoc Ryan Blaustein presented some Hartmann Lab research in the popular science communication session “The Up-Goer Five Thing: Simple Words for Tiny-Life Studies.” The UG5 objective is to share your work in a simple and entertaining way by using only the ten hundred most commonly used words. Here are some examples and a handy text editor to test for the approved language.

The ASM session was set up as a competition between “People Running Things” (PIs) and “People Still Learning” (trainees). Each presentation was treated like a normal 5-minute powerpoint pitch, but with a UG5 twist on things…well, there was a surprise guitar sing-a-long led by one of the participants. At the end, the audience voted on the best team overall (best hypothesis, methods, results), team MVPs, and best word/phrase substitution. Team “People Still Learning” won – congrats team! Here’s what twitter had to say about the event.

Here’s Ryan’s reaction to the event:

“Participating in the UG5, from preparing the abstract to giving the formal presentation, was a fun learning experience. It helped me think about new and better ways to communicate my everyday work. All scientists can certainly benefit from knowing how to share their work in lay terms. Now, along with Erica and Jim, I would like to help bring this type of event to our department at Northwestern University to challenge student’s science communication skills in a creative arena.”