Who would have thought that I would land my feet on U.S. soil? Two days ago, I finally did that. Prayers for “protection from mechanical failure and violent storms” (Chan, 2007) were delivered from Soekarno-Hatta Airport and I landed safely with colleagues, Yoes and Wara, at O’Hare Airport.

Chicago has entered the summer but it has not shown the kind of weather I expected. My colleagues and I arrived on a cloudy day and the wind seemed to be very enthusiastic about our arrival. The legend is true. Chicago is a windy city.

The three of us were very fortunate to have Beth, our Program Manager, pick us up at the airport. The queue to pass through immigration was as long as the queue of cars from Sudirman to Thamrin on Friday nights, so Beth must have had a huge amount of patience to wait for us to finally emerge one hour after our arrival time.

During our ride from O’Hare to Evanston, there was no traffic congestion and I enjoyed seeing the houses along the road. Most seemed to be built of dark red bricks and had no fence or gate—a rather different view from the typical middle to upper class homes in Jakarta. But I noticed also a small similarity with Jakarta, that is, most houses I saw had one to two cars parked in front. In between one housing area and another, we passed a car company and were surprised to see the amazingly low prices of used and new cars out for sale. If city administrators of Jakarta were to come here for their annual policy study exchange, I hope they would not be inspired to reduce the prices of cars back at home. Can you imagine how the traffic in Jakarta would be?

Evanston, in my opinion, is a small town that is quiet in the right amount. It is also easy to get around because the people are very friendly and helpful. The next great thing is Northwestern University’s (NU) campus. Although NU is known to be academically demanding, it also offers wonderful refreshing settings such as their jaw-dropping blue lake near Norris University Center. Overall, the environment of NU campus is very conducive to studying and learning.

Going back to the time way before this experience, my main motivation in applying for the Arryman Fellowship was to fulfill my dream to live in and work for an academic environment. Hence, I am grateful that I have now reached the beginning phase of living that dream.

It was two weeks ago when I started to pack my stuff for a journey to the United States. My mind was filled with various thoughts, a mix of excitement, thrill, joy and anxiety. It was very similar to the atmosphere in Indonesia at that time, in which people were drawn into a political twister of presidential campaigns, the euphoria of World Cup and the start of Ramadhan. However, I was ready to put aside all those matters for a while, to depart to the U.S. and to start my one-year fellowship program.

Crossing several time zones could make your head spin. I had to take a domestic flight from Bali to Jakarta and there met with the other Arryman Fellows, Yoes and Sabina, before moving on to another flight that would take the three of us to Chicago via Seoul. I also made ​​the mistake of spending 24 hours watching the in-flight movies, which in turn triggered a long jet lag.

We finally set foot on American soil on the morning of July 2. Despite the long wait at O’Hare International Airport, it was calming for me to see the diverse people who come from all over the world standing in line for the immigration process. Some people who were just in transit, others came for a vacation, and still others, like me, who want to achieve their American dreams. We were picked up by Beth Morrissey, our Senior Program Coordinator, who patiently waited for us for more than two hours. 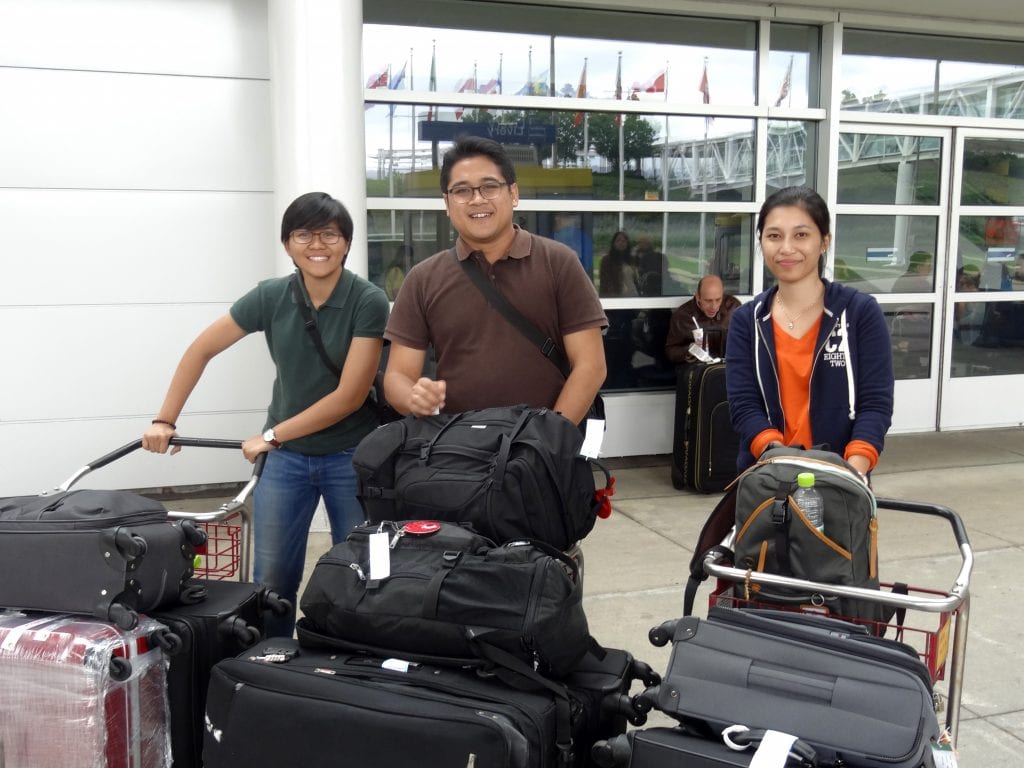 Touched down at O’Hare International Airport in Chicago

Despite the jet lag that hit me, I was still amazed by the view from our taxi windows. The American cityscapes were somehow familiar, as I have studied them from my urban design books: wide roads, big cars, boxy skyscrapers. It was a pleasure to finally get to see them with my own eyes. Along the way, we were also astounded by the rows of vernacular houses, gracious parkways, arranged in a grid street pattern. Then we entered the Evanston, an historic suburb set in a verdant environment.  I could not stop noticing the abundant old houses, probably from the late 19th and early 20th centuries, combined with international and contemporary buildings.

Even though I kept telling myself to be ready for a year-long adventure, the sudden bombardment of new things created a strange feeling in me. But, I reminded myself that I came to the U.S. for a greater purpose, to conduct my research and to achieve my educational goals. I believe that it will take time to adapt, to open my mind and absorb new experiences and sensations. There will be a lot of turbulence along the way, but that is how life teaches us. In the words of Ursula Le Guin, “It is good to have an end to journey toward, but it is the journey that matters, at the end.”