It has only been my third week in the U.S., yet I have done quite many exciting activities. The four main activities that I wish to highlight are Indonesia’s Presidential Election Day, “Taste of Chicago” food festival, “Iftar in the Synagogue”, and Baha’i House of Worship tour. Within such a short period of time, I have gained a tremendous amount of lessons and I thought they needed to be organized and shared in this blog.

The ballot took place at the Indonesian Cultural Center in downtown Chicago. It was a very meaningful day because my colleagues and I were able to interact with fellow countrymen of different backgrounds and hometowns who came to the U.S. for a common purpose: either to pursue higher education or professional training. Insightful exchanges about studying in the U.S. and current socio-political concerns in Indonesia became the icebreaker of our interaction with our new Indonesian friends. And for the purpose of celebrating Indonesia’s democracy, there could not have been a better way than to end the day with giant slices of Chicago-style meatball pizza with our new friends. Not that Indonesia’s democracy has anything to do with American food, but what I am trying to emphasize is that the day also marked my first encounter with a supersized pizza containing large meatballs—and therefore is worth noted in this blog.

Held every summer at Grant Park, this food festival was so much fun because of three reasons. First, I found my favorite food: alligator sausage. It had been awhile since I last had alligator meat, and after finally being able to taste it again, I felt partially good—and partially like a mean predator, ready to eat some more food. The alligator sausage’s BBQ sauce, more importantly, was undeniably delicious. Second, I was able to restrain myself from eating one whole piece of the festival’s legendary and massive turkey leg (and if you have a hard time imagining its size, think of Fred Flintstone’s drumstick). It was very tempting to see one of my colleagues slowly enjoying his burning red turkey leg, so having been able to reject those hundreds of calories was an achievement for me. Third, I enjoyed seeing and being in the crowd. It was fun to hear catchphrases that I have never heard before from people around—it felt like watching my favorite American TV series live. Additionally, it was simply lovely to observe the diversity of the people of Chicago and their stylish summer holiday attire.

Iftar in the Synagogue – July 17

Thanks to Theresa and Melvin, who are foster relatives of Wara (my colleague from the sociology department), I was able to experience this engaging dialogue between Jewish and Muslim communities in Chicago. Hosted by the Chicago Sinai Congregation in its grand synagogue at Delaware Street, main highlights of the event were keynote speeches from the distinguished Imam Abdul-Malik Ryan and Rabbi Michael Balinsky. Both emphasized on the importance of mutual understanding and empathy towards one another as human beings, regardless of religion or beliefs (please also see Wara’s exclusive report about the important message delivered by both religious leaders). It was also my first time to join in prayer with a Jewish congregation. Listening to how the members recite and sing their prayers in Hebrew was priceless. Somehow I felt very much like attending an ordinary Mass. After the brief ceremony, it was our Muslim brothers and sisters’ time to break their day of fasting by praying the salat inside the chapel on the west side of the synagogue. Led by a young imam who happened to live in Evanston as well, people who wished to observe the salat were welcomed to enter the chapel. A Mediterranean dinner with everyone present followed next. It was overbooked that as walk-ins, my group unfortunately could not socialize further and join the dinner this time. Now that we know about this meaningful event, perhaps we will register to attend the entire program in advance next time.

Last but not least, just before the first day of my summer program in the International Summer Institute (ISI), my program manager Beth took my colleagues and I to visit a gorgeous Baha’i temple at Wilmette. The surprising fact about the temple was its being the center of Baha’i Faith in the North American continent. Situated in the middle of a lovely and upper class suburban neighborhood, the hectagonal temple stood grand and looked very much like a mosque from afar. Traceries on its pillars were unique and—I wanted to say jaw dropping—but perhaps eye-popping would be the accurate term in this case. You could find the Crucifix, Star of David, Swastika, Wheel of Dharma, cathedral arches, Arabic calligraphies, and many other religious symbols of the world on the temple’s eight pillars. Inside the temple, the altar was simple: one glassed podium with two sheets of Persian carpets beneath it. High above the altar was a dome with Arabic characters for “Ya Baha’u’l-Abha” which meant “O Glory of the All Glorious” (The Baha’i House of Worship pamphlet, 2014) engraved in gold.

From the presence of a large Indonesian community, the availability of all kinds of food, to the diversity of faiths, these past couple of weeks have shown me the many delightful tastes of Illinois. Hopefully the above experiences suffice to confirm that effective learning could be done beyond the classroom.

Situation of the ballot on Indonesian Election Day in the Indonesian Cultural Center near Jackson (blue line “EL”) was well-coordinated. 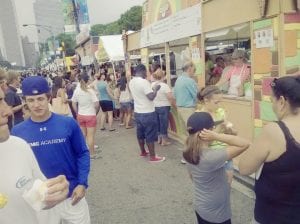 The food stands in “Taste of Chicago” festival were all so tempting. 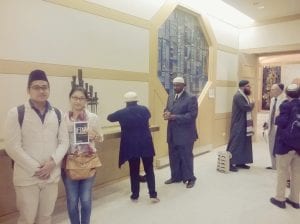 After our Muslim brothers and sisters finished delivering their salat, hosts from the Jewish community ushered them to the dining room for their get-together dinner. 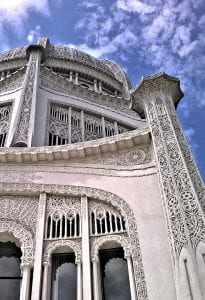 Traceries on The Baha’i House of Worship’s pillars incorporated all the religious symbols of the world.